Set amidst the old French architectural villas of Dalat mountain town, the "labyrinthine" house is like a maze with spiral staircases, carved bedrooms and many nooks and crannies. This is a work to express the imagination of Ms. Dang Viet Nga, 79 years old. "The crazy house is the pinnacle of my life and my creativity. I want to create something original, pioneering and different in the world," she said. 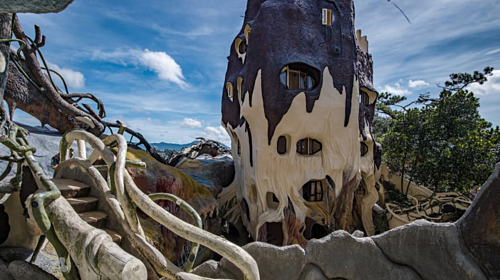 After receiving a PhD in architecture in Moscow, Ms. Nga spent several years in Russia and then moved to Hanoi to work. On a business trip to Da Lat, Ms. Nga was very excited about this land because of its lush scenery, cool climate, kind people and hope to live here.

In 1983, she moved back to Dalat with her 8-year-old son. After years of working on projects, she realized she needed to free her imagination. In February 1990, she planned to build a "Crazy House". However, instead of the usual design, she painted a series of paintings to express her strange perspective.

As an architecturally expressive building, the house has no square corners but instead is naturally shaped like mushrooms, seashells, caves, spider webs ... Ms. Nga is free to entertain herself imagine. Structures do not need to follow any rules, except for some basic principles to make the building safe and secure.

"My mother uses a lot of concrete because it is cheap and easy to transform. She can create anything she wants. This material also reflects what she is envisioning." About a year after starting, Hang Nga villa is open to the first visitors.

Currently, the "mad house" is like a magic forest in real life. "I feel that over the past century people have destroyed nature so much, not only in Vietnam but all over the world. So I want to create an architecture that can bring people closer to nature," she said. ".

The main house is built on high, like a corner in the movie Witch Hunter (Hansel and Gretel), located in the middle of the open garden, surrounded by 4 large tree houses. The "branches" of cement are designed to be twisted bridges so that people can move back and forth between houses.

At first glance, these "utopian" structures remind the viewer of a scene in a painting by Salvadoran artist Dali, or organic works by architect Antoni Gaudi of Catalan.

This style continues to be expressed in 10 guest rooms. Each room is named after an animal or a tree. There are bedrooms like caves, and many seats made of wood. 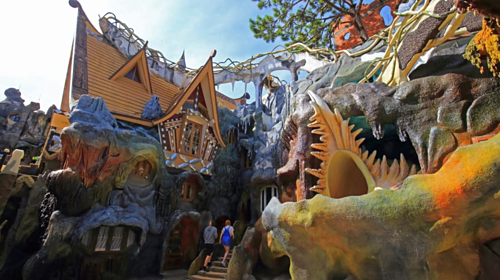 While her son is in charge of business, Nga is still nurturing new things for her "crazy home". As planned, this place will have two new gardens named Land and Heaven, more flowers and a new tree house. "The crazy house will never be complete. It is a living and ever-changing entity," Nga said.