Koya - sacred mountain in the heart of Japan

This is the center of the Buddhist sect of Zhen Tong, one of the most sacred mountains in the country of cherry blossoms.

Koyasan is a town on the flank of the sacred mountain Koya, in Wakayama with a population of up to 3,000 people. In 2004, Koya and two other places on the Kii peninsula were recognized as a UNESCO world heritage site.

Today it is known as the center of the Shingon sect of Japanese Buddhism, influenced by a Chinese sect and handed down to Japan in 805 by Kobo Daishi, or is Kukai. Kukai is also one of the most revered religious figures in Japan.

If you want to stop overnight at Fudoin - the temple is located on the top of the mountain, you will be welcomed by monks Seioh Yamashina. In addition, visitors will be surprised when being "suggested": "If you want to drink beer with dinner, we have Asahi or Kirin". 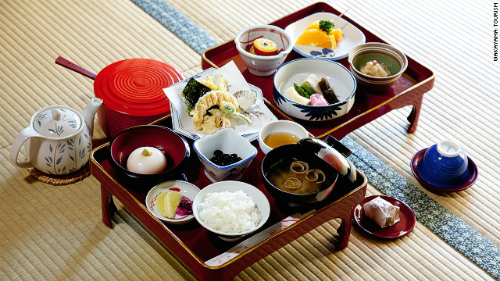 A vegetarian meal at Koya.

In Japan, some Buddhist sects are not so strict like in Thailand or Bhutan - where people are prohibited from drinking alcohol when near temples and pagodas. In addition, according to the history books, monks are also allowed to marry, have children and not be forced to be vegetarian only. That tradition is continued by the monks to this day. Now Seioh Yamashina is the head of the Fudoin temple - just like his father and grandfather used to do.

Although drinking beer, the dishes at the temple are completely frugal vegetarian food, consistent with the Buddhist spirit. Meat, fish, eggs are the dish not on the menu. The Japanese call this cuisine style Shojin ryori - a vegetarian dish in temples and pagodas. After each meal, visitors often hear guides introduce about Japanese Buddhism as well as customs and culture of this country.

Fudoin is 52 of 117 temples in Koyasan that allow visitors to stay overnight. The scenery here is serene with lush green forests, clean paved roads, restaurants, cafes and souvenir shops.

At Koyasan, every temple, every gate is very ancient and beautiful. The most special is to mention 20 buildings in Danjo Garan (a combination of temples and statues) - the place is known as the second holy destination in Koyasan. The most beautiful place is Banryutei - the largest rock garden in the country. This garden is located at Kongobuji Temple, completed in 1984, to commemorate the 1150th anniversary of Kobo Daishi's entrance into nirvana. 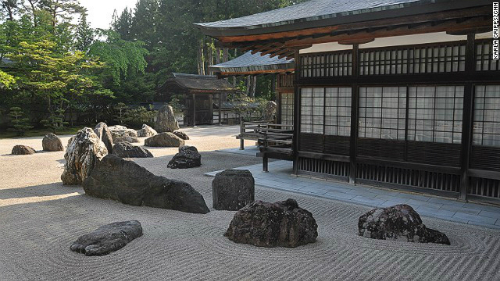 However, the pinnacle of any journey to Koyasan is Okunoin, the mausoleum of Kobo Daishi - the place honored as the most sacred place. To reach Okunion Shrine, visitors must cross the Ichinohashi bridge (the first bridge). Here, you have to bow to show your devotion to Kobo Daishi before setting foot on the bridge. Across the bridge is the Okunoin Cemetery, Japan's largest cemetery with more than 200,000 gravestones along the nearly 2km long road. At the end of the road is the tomb of Kobo Daishi. There are many tombstones here because the Japanese believe that when they are near Kobi Daishi, they will receive the peace when crossing the afterlife. There are tombstones that have been here for centuries.

Japanese people also believe that Kobo Daishi - the founder of Chan Tong sect in Buddhism does not die. He was just meditating in the middle of tranquility and waiting for Buddha, and at the same time blessing the people to pray for blessings.

Right in front of Kobo Daishi's tomb is the Torodo hall. In the lobby, there are more than 10,000 lanterns always lit. 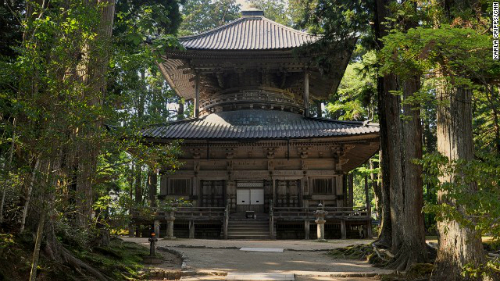 A two-story pagoda is located in the Danjo Garan complex.

At Fudoin, at 7am, monk Seiryu Yamashina is staring at a large book and performing his morning ritual. Joining in his chanting were two other monks. He prays for all the souls at Fudoin and a peaceful society. Visitors can also participate in the ceremony and are given two copies in Japanese or English if they wish to chant with them. After the ceremony, guests will be served a delicious Shojin ryori breakfast.

Coming here, visitors can also use free wifi. "It is the duty of the temple owners to respect traditional values ​​and embrace new technology. We need more ways to share information more easily. In addition, visitors also need to be in touch. with their family when the pilgrimage is coming here, "Seiryu Yamashina explained about using the internet here.