The bisected Apple Rock, located off Tasman Bay, in Abel Tasman National Park, is the most famous geological wonder of South Island, New Zealand. This is a spherical granite block, with a diameter of about 5.5 m and is estimated to weigh up to 242 tons. Located about 50 m from the coast, it is supported by granite shaped like a small island.

The official name of Tokangawhā apples in half was set in 2014. Photo: WikiCommons.

The 120 million-year-old rock was split into two parts, creating a V-shaped opening, like an apple cut evenly with a knife. Therefore, the Maori have a legend that said the stone was cut by the sword of Zeus, while fighting Neptune. Therefore, the stone block is also called Tokangawhā, which means Rock explosion.

Geologists believe that, during the ice age, water gradually seeped through the natural cracks in the rock table. Then, when the temperature dropped, the water quickly froze and spread, causing the rock to split in half. However, many people suspect that the rocks below are not completely natural. They seem to be built further to support and hold the Apple stone in half.

Along the beach are views of the sun rising through the crack of the rock. This is said to be the way for ancient astronomers to know the spring equinox, summer solstice, autumn solstice, winter solstice and keep the calendar always accurate. Many rocks have also been found diagonally carved on the coast, such as landmarks that mark the position of the sun's observation. 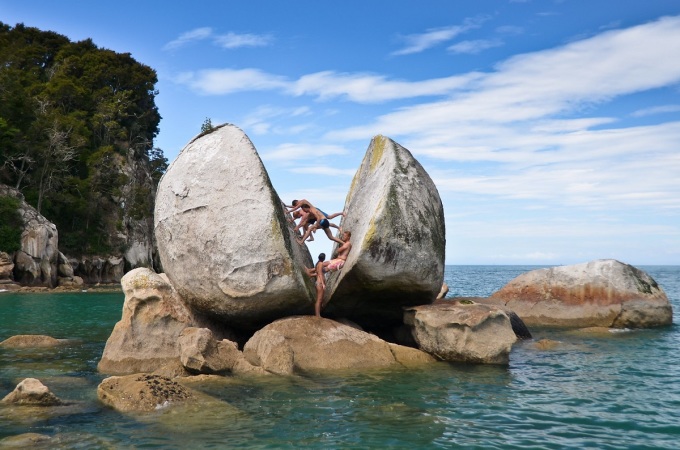 This special shaped rock is located in shallow water, so visitors can wade here at low tide. Other options are kayaking, jet skiing or hiking trails between Kaiteriteri and Marahau.

Abel Tasman is a national park located north of the South Island. It was named after the first European explorer who discovered New Zealand in 1642, Mr. Abel Tasman. The park is one of the most beautiful and famous tourist destinations in the country, covered by 225 km2 of primary forest and golden sand beaches, clear water river.

Abel Tasman National Park is located about 60 km from Nelson. From the city airport, visitors follow Highway 60 via Motueka. Follow signs to the town of Kaiteriteri. Alternatively you can choose to go by bus from Nelson and the town of Motueka.

From Wellington, there is a ferry service to the South Island. Ferries usually travel through the Cook Strait to the town of Picton. From here to the park about 3 hours drive.

According to Atlas Obscura. See more: