The only library in the US that doesn't have books

USA The Haskell library is always full of books, but most of them are located in Canada instead of the United States.

The Haskell Opera House and Opera is not as famous as the Statue of Liberty, but it always attracts visitors, because it is located in the towns of Stanstead, Canada and Derby Line, USA.

On the library floor on the first floor, there is a dividing line that divides the two countries. The main entrance of the library is on the American side, and most books are in the Canadian area. Therefore, Haskell is known as the only US library without books. 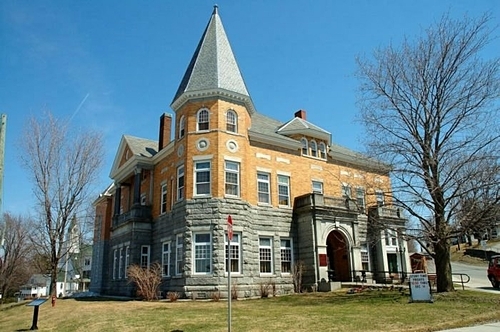 The building has two completely different addresses, located on two different streets. Those addresses depend on whether you are in the US or Canada. Photo: Only in your State.

This is similar to the Opera theater on the second floor. The majority of musical theater seats are on the US side, the stage is on the other side of the country. It is also known as "the only opera house in the US that has no stage".

When visitors come here to visit, they are not required to give a passport to seal the entry and exit, nor need to show documents for clearance. However, Haskell's website always emphasizes that the line inside the building is real, and it obliges visitors to follow strict rules. That means which country you are, must return to the correct borders of that country when leaving the building. If you violate, you will face the risk of being detained and fined.

The Haskell building was completed in 1904, by Martha Stewart Haskell and her son. This work was completed as a tribute to the late husband and father Carlos Haskell. Their family hopes citizens of both countries will use this place as a learning and cultural center.

Opening time from Tuesday to Friday is 9am-5pm, only for Saturday, the building is closed from 2pm and Sunday and Monday break. Admission is free. If you want to rent a guided tour, the fee is 10 USD for adults, free of charge for children under 12 years old. Each tour takes 25 minutes, and visitors must obey the laws of Canada and the US when they come here. You will not be allowed to trade or trade in Haskell, nor can you bring food from outside. If you want to exchange goods, you must bring them to the customs. 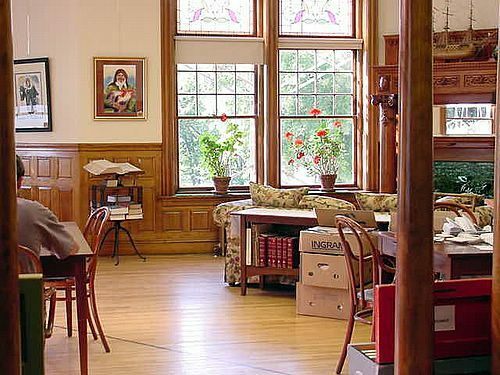 The black line on the library floor is the border between the two countries. Photo: Atlat Obscura.

Not only a place to entertain and provide knowledge for citizens of the two countries, this building is also a place to help separated families reunite without the hassle of entry and exit. Shirin Estahbanati and her family are one such case.

One day in early November, the Iranian student drove for 6 hours, from New York to Derby Line. As she walked, she cried at the thought of going to see her parents again after 3 years of separation. Shirin's father had a heart attack and she did not dare to leave the United States to visit Iran. Shirin only has a one-time entry visa, so she is not sure if she will be accepted to the United States a second time if she leaves. She thought of the geographic location of the Haskell library.

Her parents flew to Canada and to Haskell. After more than two hours of waiting, the 31-year-old female student finally met her parents and sister. They hugged each other in happiness and joy. Shirin said that at the time, she hoped that all the clocks in the world would stop to allow time to stop.

Many families choose to reunite just like Shirin. Many guests said they had no problems with the governments of the two countries, while others were kept by customs for several hours to check. A librarian said the US and Canadian governments are looking for ways to limit such meetings.